Raising the Voice of MENA Women in Times of Transition

The changing global democracy landscape has made strategic differentiation an important imperative. That is, democracy aid providers face the dual need to (1) replace the uniform transition paradigm with a more differentiated categorization or framework for understanding and describing political transitions and (2) formulate differentiated assistance strategies that respond to the specific challenges of the varied transitional contexts in which they work. Strategic differentiation must be part of country strategy development—thinking through what mix of programs is most likely to be effective in a particular context. And it also must be central to specific program development—figuring out, for example, how elections assistance or parliamentary strengthening work should vary based on the political context, getting away from standard approaches to these specific areas of practice.1

Recently, Arab Uprising has finally made it to Sudan, Algeria, Lebanon and Iraq. Though the protesters could successfully oust their authoritarian leaders, many observers have witnessed this latest wave with cautious optimism, taking into consideration the democratic regression that followed earlier waves of Arab Uprising in Egypt, Yemen, Libya, and Syria. Like all earlier Arab protests, women were in the heart of the anti-regime demonstrations in Algeria, Iraq, Lebanon and Sudan. The leading icon of the Sudanese revolution was a woman, the Kandaka, and, yet, women made 60 to 70 percent of the demonstrators. The same goes for Algeria and others countries, where younger women were clearly involved in leading the protest. Women active engagement is hardly surprising given the direst impact of sociopolitical injustices on them, and the long legacy of women movements in countries like Sudan and Lebnon. Yi-Ting Wang, et al. studied women’s rights in democratic transitions in 173 countries from 1900 to 2012 and argued that “women’s organising may be crucial during democratic transitions. In countries where women have civil liberties and rights, the costs of repression for authoritarian rulers tend to be larger than in countries where half of the population is not granted such rights.”2

Many transition strategists underscore the importance of including women in the early stage of any political new formation since national elites tend to sustain their power once they are established. Even though some might see this as an elitist outlook of political change, it is essential to understand how excluding women would negatively affect the quality of the democratic transition. Women are exposed to the economic challenges and the “politics of daily life.” Providing men and women with their rights increase the cost of repression, as Yi-ting Wang et. Al. argued above, and reduce the capability of the regimes to thwart

democratization. Above all, reversing women marginalization would ultimately lead to a redistribution of economic and political resources more fairly.

It is tempting to bounce back to old assumptions and stereotypes during turbulent transitions. For instance, many Western actors tend to consider authoritarian regimes as a guarantee of stability in the Arab countries, and they assume elections to be the sole tool for democratization. The Uprisings contributed to altering the stereotypes about Arab women as powerless victims and revealed the wide diversity of their social and political positions within the same country and across countries. Furthermore, there has been a growing interest to explore the relationship between religious and cultural norms, on the one hand, and international standards of human rights, on the other hand, especially in areas related to gender-discourses, refuting the so-called Muslim and/or Arab exceptionalism. Therefore, there is an urgent need to capitalize on the newly emerging opportunities for women that have emerged after the Arab Spring.

Achieving stability and sustainable civil peace in the MENA region through comprehensive, solid, and inclusive democratization, one that is spearheaded by women, youth and other marginalized groups.

We work with national, regional and international partners who have the same vision and experience in the MENA region to strengthen and empower women voices, aiming to create non-violent responses to the challenges and conflicts of the current transitional period, using

dialogue processes while building women capacities for better understanding and management of sociopolitical transformations during these periods of transition.

This will be achieved by establishing an umbrella program or initiative that create a space for launching more specific initiatives for mapping women initiatives/activists, continuing women education, training and capacity building, and re-defining dialogue priorities and agendas. Diverse voices will participate to enrich dialogue, increase awareness and advocacy, and face the challenges of transitional periods.

experiences. Dialogue processes are built on changing stakeholders’ perceptions so as to enable the critical reevaluation of their roles and strategies.

events, or incidents—and to magnify the impact of this dialogue by presenting its outcomes to the public or by including the public in the process.

Scope of Interest and Key Themes:

4.Areas of intersection between the national and regional levels. We are especially interested in the exchange of experience and knowledge among the people of the MENA region.

5.Studying the role of Arab women in the diaspora in articulating and confronting the challenges and conflicts of transitional periods.

WADTF is a platform dedicated to sustaining the critical dialogues on women issues in the complex transition contexts and supporting diverse discourses and initiatives through researching, networking, and developing a wide array of events and activities.

– Identifying strategies to develop and sustain women voices and their civic skills during the intricate processes of democratic transitions and their divergent outcomes.

– Providing analyses by observing nuance changes on the micro-levels, especially among the young generations of women activists and organizations in their response to the cultural and socio-political challenges.

– Supporting women groups and civil society networks through training and sharing experiences of advocacy and research and clarifying the intersectionality of women’s rights and freedom struggles.

– Encouraging women presence and engagement in public discourses that address their issues and offering special attention, based on previous experiences, to discuss “Islamic Feminism” that is considered by some researchers as “probably the most obvious example illuminating  the various ways in which gender justice can be legitimized and furthered on the basis of Islamic traditions.”3

– Considering the various positions and double challenges facing women from ethnic and religious minorities in the region through working with local and national contributors and researchers.

– Opposing violence against women in the conflict-affected transitions and encouraging women participation in post-conflicts peacebuilding negotiations.

The Women’s Observatory, an initiative to monitor women’s evolving roles and their representation during transitional phases in MENA. The project seeks to map new key players, and new approaches to women issues. It also seeks to pinpoint the strategies and discourses adopted in processes where the marginalization of women is likely to happen. The project will be implemented by research groups that will research and monitor the situation—especially with regard to women’s issues and their participation—in different countries in MENA region.

EGYPTIAN DIASPORA: APPROACHES FOR INFLUENCING NATIONAL POLITICS OF THE MOTHERLAND -2020 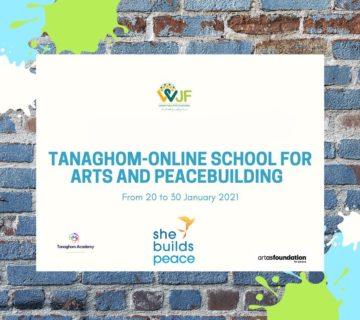 Tanaghom school for Arts and Peacebuilding